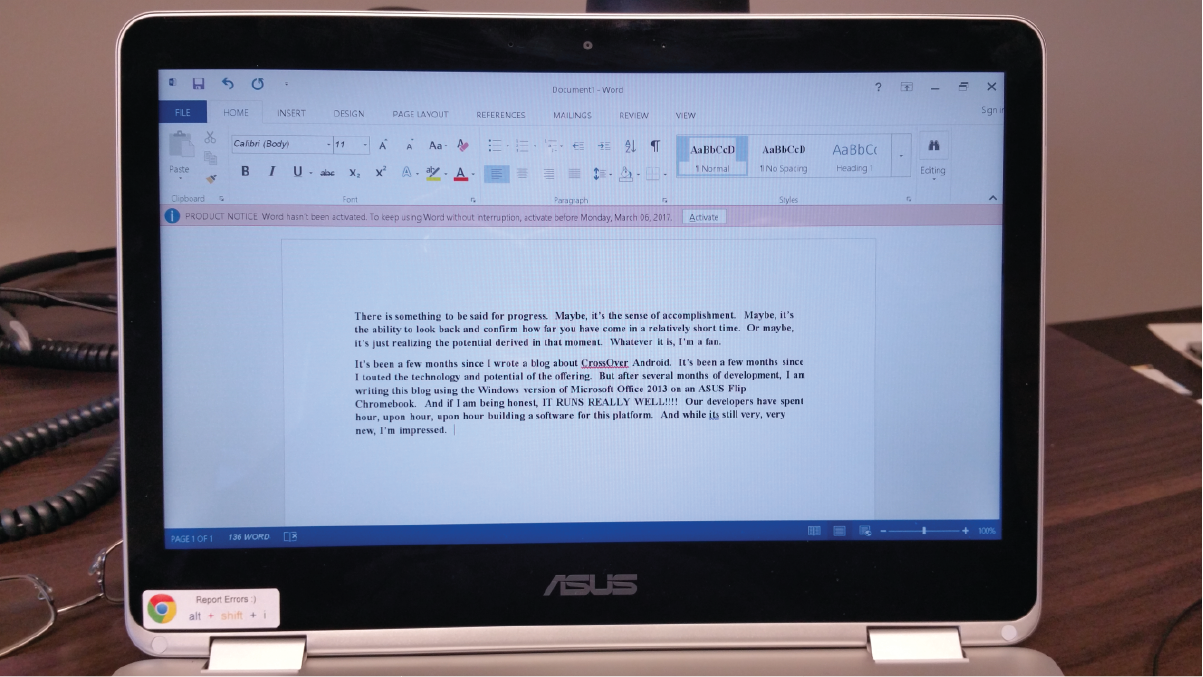 Microsoft Office on Chromebook Coming in Our Next Android Tech Preview

There is something to be said for progress.  Maybe, it’s the sense of accomplishment.  Maybe, it’s the ability to look back and confirm how far you have come in a relatively short time.  Or maybe, it’s just realizing the potential derived in that moment.  Whatever it is, I’m a fan. It’s been a few months since I wrote a blog about CrossOver Android.  It’s been a few months since I touted the technology and potential of the offering.  But after several months of development, I am writing this blog using the Windows version of Microsoft Office 2013 on an ASUS Flip Chromebook.  And if I am being honest, IT RUNS REALLY WELL!!!!  Our developers have spent hour, upon hour, upon hour building a software for…
Read More
10 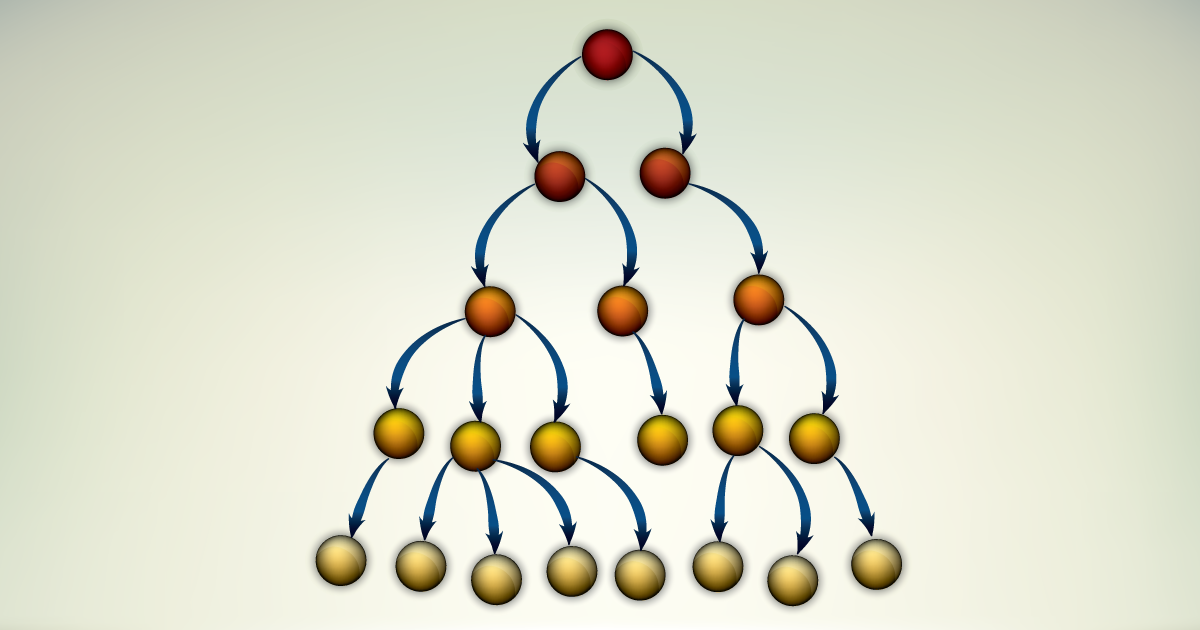 Here at CodeWeavers, customers often ask questions about how CrossOver is made. We get inquiries ranging from fairly basic to extremely technical. Involved and curious users are among the joys of basing our product on an open-source project. With CrossOver 16.2 coming out, I thought it would be a good time to talk about how we manage development and release branches for CrossOver. On the spectrum of things one might say about Wine, the topic is only a moderately technical one. It is a common question from our users, though, on our web forums and in our live chat support channel. For starters: CrossOver’s ability to run Windows applications comes from Wine. Wine is an open-source software project with a twenty-plus year history. The interesting part…
Read More
5 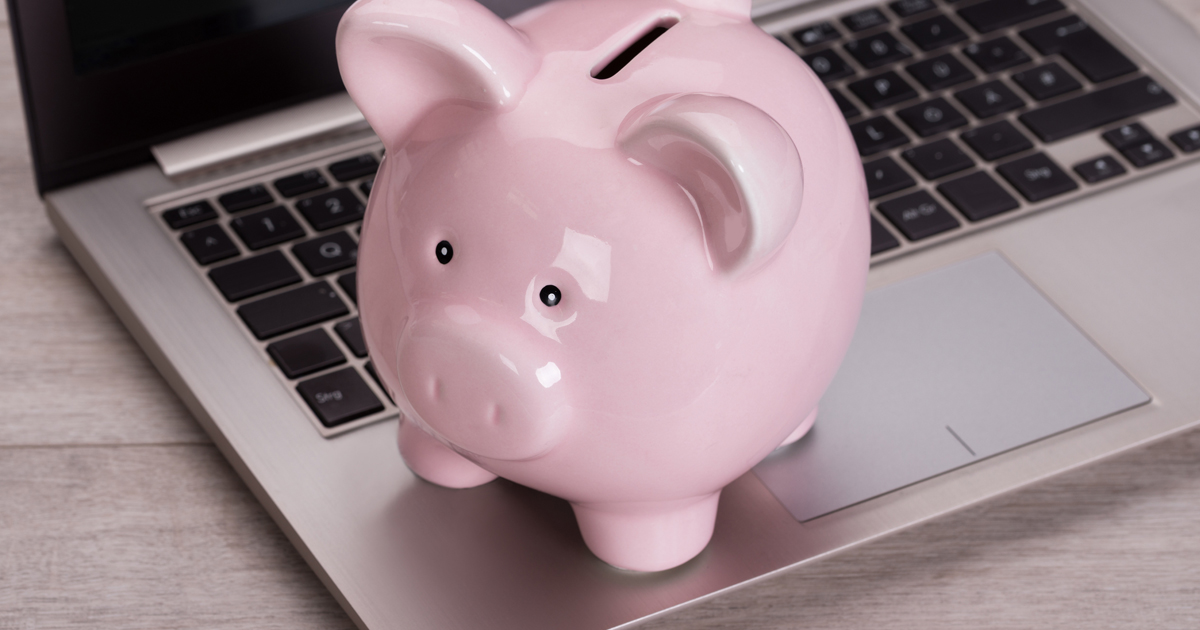 Why Windows Software Isn’t Always Available on Mac and Linux

It’s a real mystery, plaguing millions of Mac and Linux users everywhere. Do software companies think several formidable competitors already established?  Do developers assume that their underlying technology is absolutely incompatible with macOS or Linux and therefore foresee a development nightmare?  Do they unknowingly claim that the market is not attractive enough for them?  ISN’T ATTRACTIVE ENOUGH???  And there lies the aforementioned mystery! And my struggle. In an age of declining revenue growth throughout the computer industry, what if I was to give you the opportunity to significantly increase your software sales?  Would you find that ‘attractive’? According to the most recent data on computer shipments…
Read More
0 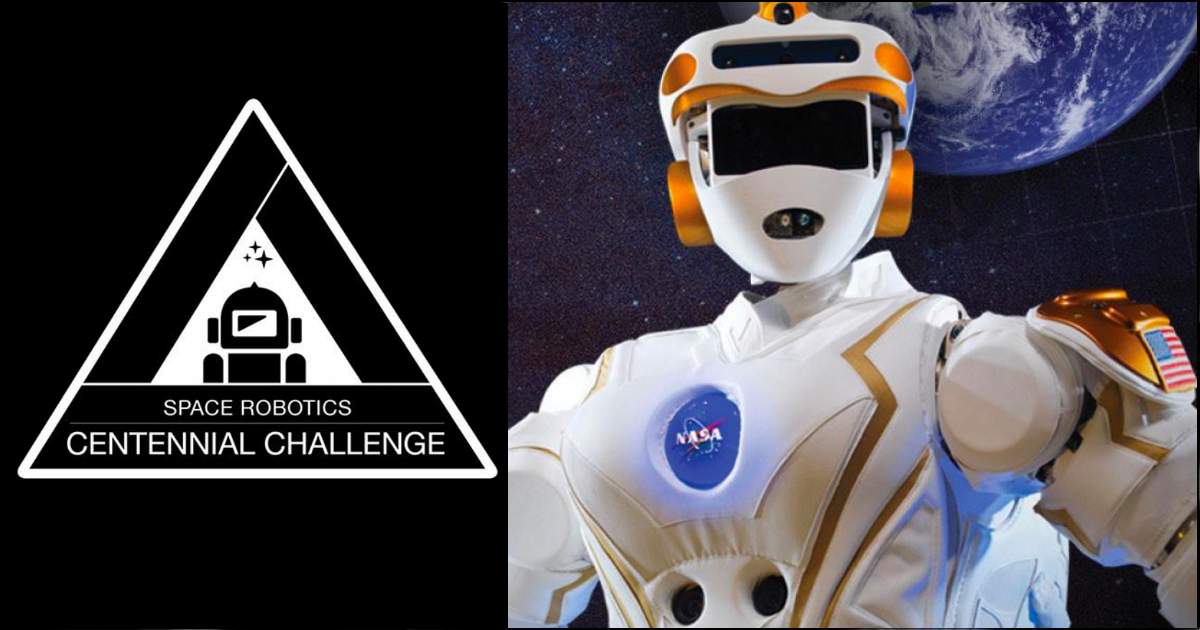 So this is not a story about Microsoft Office, Crossover or any of our normal things. This is about two CodeWeavers engineers and their friends having some fun in their free time. Oh and it includes robots!  So if you are hoping for more juicy news about Android or Office 2016 you will have to tune in later, but didn’t I mention robots! So to start things off Jeremy White has been coaching High School First Robotics for quite a while now. This year is the first year he was transitioning from full coach to assistant coach. So a number of his friends, including myself, started suggesting that maybe he needs to find a non-high school robotics competition to take a stab at.  Then we stumbled across The Space Robotics Challenge presented…
Read More
0 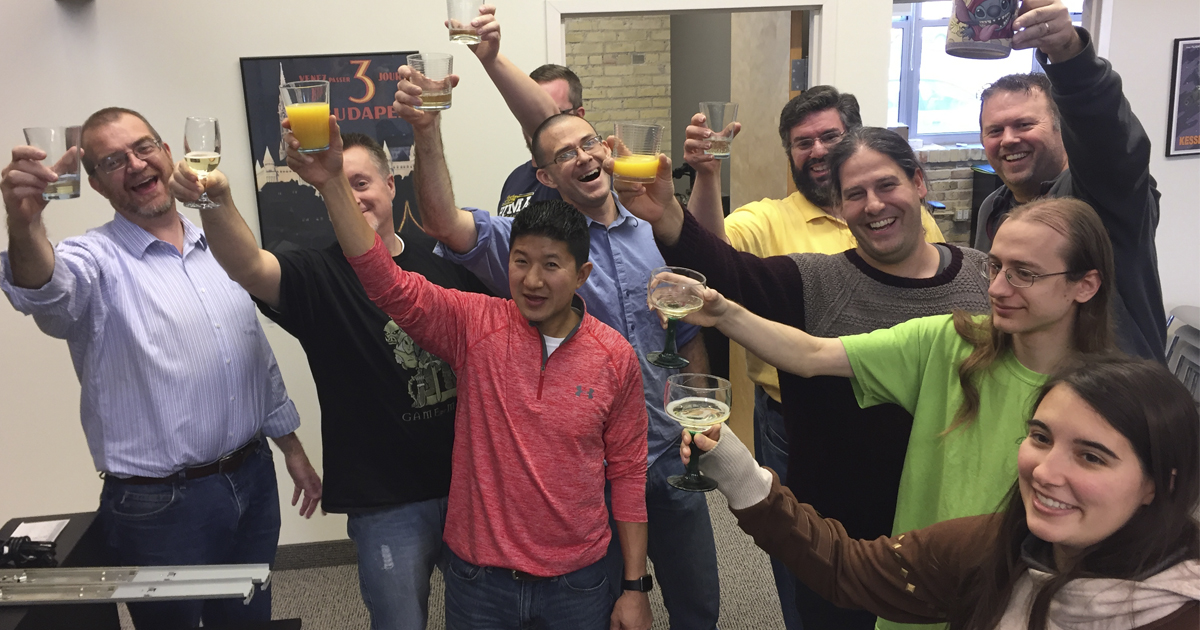 With the release of CrossOver 16, CodeWeavers finally makes good on their promise to deliver support for Microsoft Office 2013 on the Mac and Linux platforms. It’s a promise that was initially made in late 2012 and one that has taken over four years of continued and consistent development to fulfill. And now (finally), we have a version 16 of CrossOver that includes this support. With that introduction, I proudly present to you the newest, latest, and greatest version of CrossOver, CrossOver 16.While it would be great to sit back and enjoy this moment (pause), CrossOver 16 ushers in a host of other new and exciting features like 64 bit support; it’s based on Wine 2.0 which includes thousands of improvements to Windows compatibility; Quicken updates now…
Read More
7 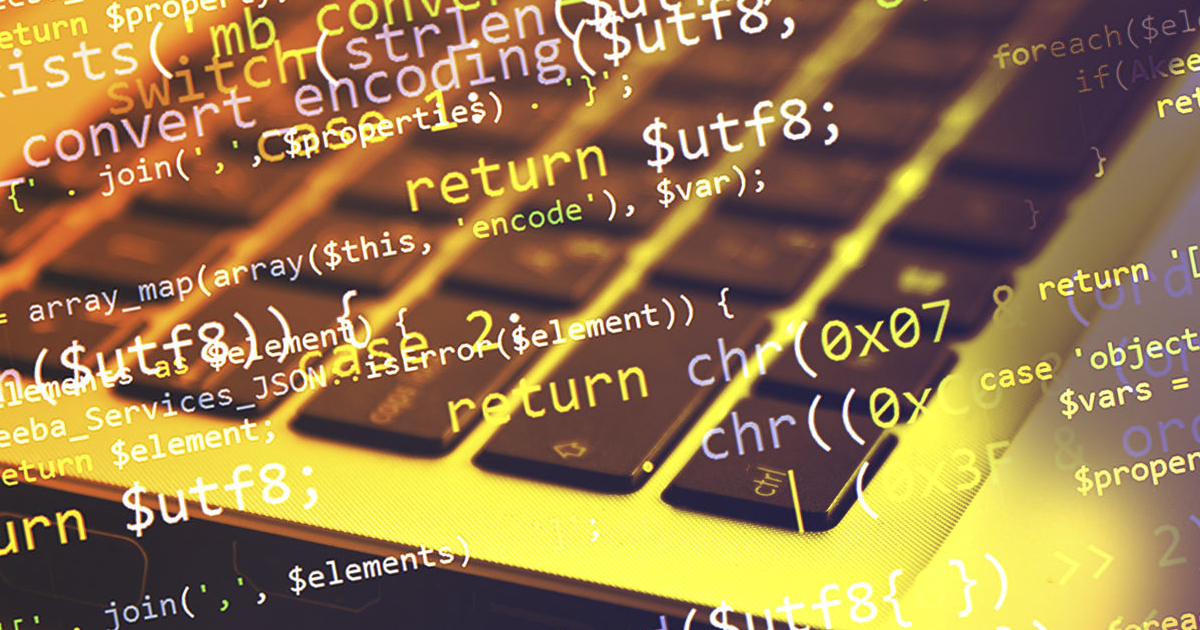 Recently, one of our clients needed a Windows DLL implemented that exported C++ objects compatible with their existing application when run under Wine. While this was new to me, this is actually something we already do in Wine. We have implementations of Microsoft's Visual Studio C++ runtime objects, which are used by lots of applications. Applications which use those objects expect to get C++ objects from Windows DLLs like msvcp. I've never worked with this code before, and I don't do a lot of assembly-level work, so it was a fun learning experience for me. Wine is a C-language project, but we export C++ objects that are compatible with applications built on Windows. We even support Visual Studio RTTI data, constructors, destructors, and so on. I…
Read More
2 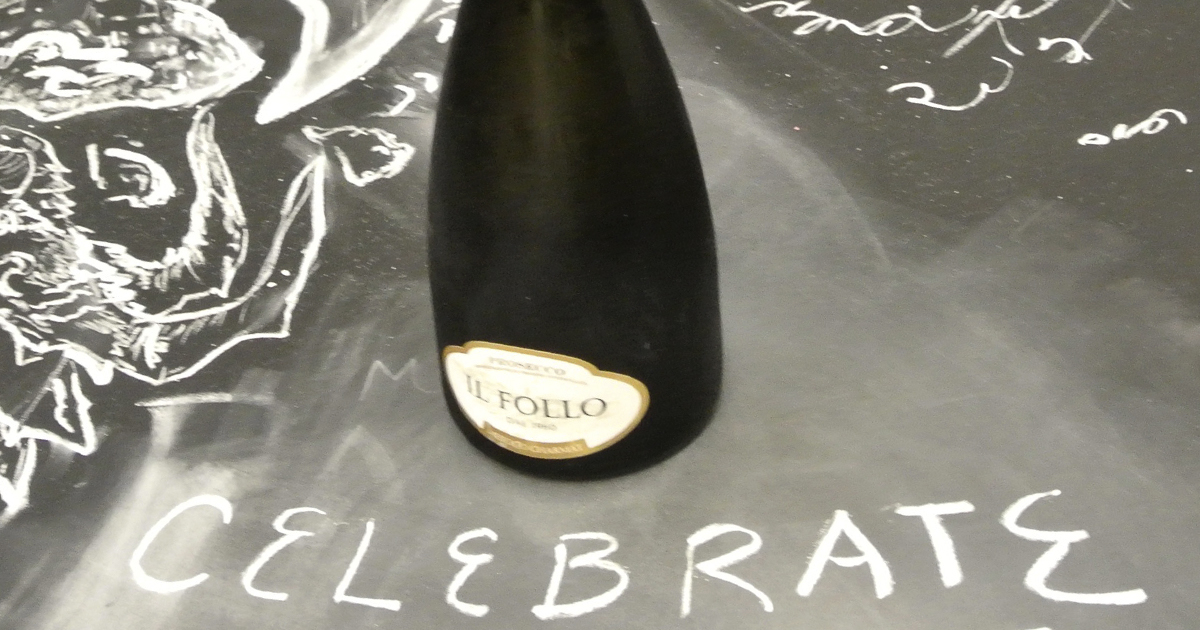 The Times Are a Changing

When did it hit me that the times were a changin’ at CodeWeavers corporate Headquarters (and no it wasn’t when Bob Dylan got awarded the Noble Peace Prize for Literature)? Maybe it was when we introduced CrossOver on a platform not in our sandbox – ANDROID. Or when we lost our COO of 14 years to a new career opportunity, or rearranged the office (everyone had to move offices and have a new office mate), or chalk painted furniture, or had an office pet for a day, or when the conference room moved, or the standard monthly company meeting date moved after 20 years in existence (revolution). AND we bribed attendance with bagels instead of donuts. Or was it when everyone went from a Linux or macOS to a Windows system?Just checking to see if you are still…
Read More
12 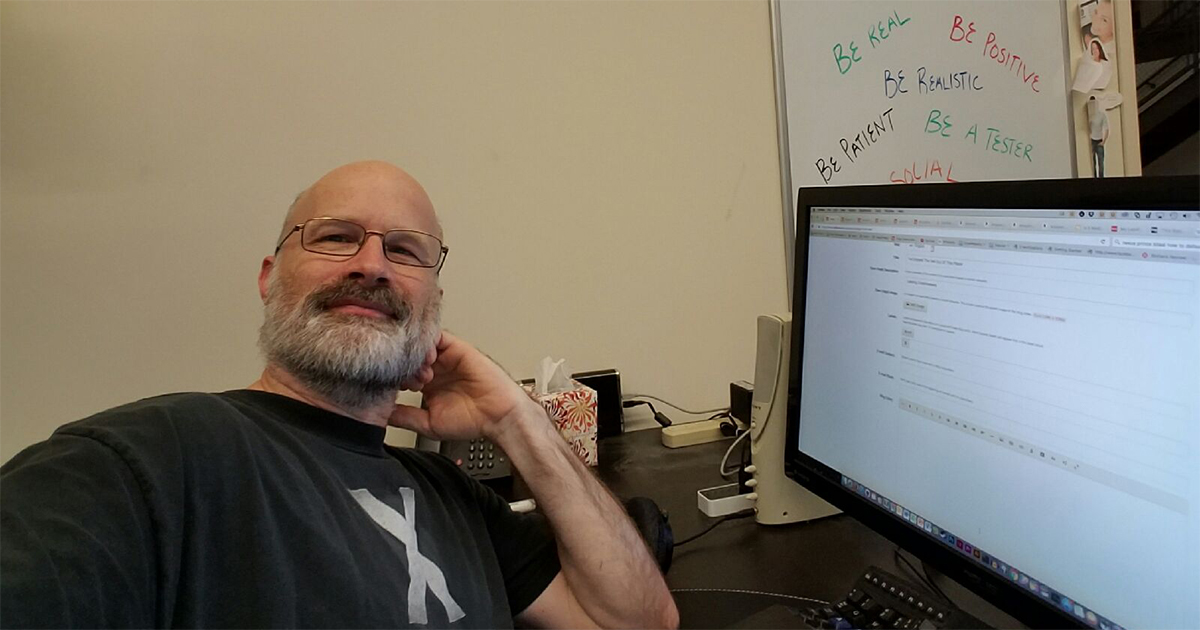 I've Enjoyed The Hell Out Of This Place!

Today feels incredibly weird. After fourteen lovely years here, today is my last day at CodeWeavers. I've accepted a senior management position at a non-profit up the street called College Possible , and I start next week. So this morning I sit in my now much emptier office, no artwork on the walls, most stuff already bagged up and taken home. I'm basically just waiting around for my goodbye lunch.I've enjoyed the hell out of this place. CodeWeavers has always been like family to me--a slightly broken, dysfunctional family, of course, but all of them basically good-hearted, and really, really smart. I've worked in big companies before. I've dealt with the politics, the hidden agendas, the turf wars, the nonsense. I've had none of that here. This place has…
Read More
4
popular posts
subscribe
share
label cloud
bloggers