Recently, one of our clients needed a Windows DLL implemented that exported C++ objects compatible with their existing application when run under Wine. While this was new to me, this is actually something we already do in Wine. We have implementations of Microsoft's Visual Studio C++ runtime objects, which are used by lots of applications. Applications which use those objects expect to get C++ objects from Windows DLLs like msvcp.

I've never worked with this code before, and I don't do a lot of assembly-level work, so it was a fun learning experience for me. Wine is a C-language project, but we export C++ objects that are compatible with applications built on Windows. We even support Visual Studio RTTI data, constructors, destructors, and so on. I actually got lucky: my project pretty much just needed C++ class function calls, no constructors or RTTI data, so I was able to skip a lot of the complication. The method we use to export Windows-style C++ objects from a C library built on a Unix system is pretty interesting. Here's how it works.

A little git-fu shows it dates from 2003 and was written by Alexandre Julliard, the Wine project's leader and maintainer, with some improvements made later. Here's a trivial sample of how it's used:

When your code makes a call into a function, there must be some way to pass your call's arguments into that function. This is done through some combination of storing data on the stack and in the registers. There is no clearly best way to do this, so of course a few dozen different ways have been created over the past few decades, all of which are equally good. These are the calling conventions.

We're concerned here with just two conventions for the x86 architecture: thiscall, and the hilariously optimistically named stdcall. thiscall itself actually has two sub-conventions, one when built by GCC (and Clang?) and another when built by Visual Studio.

First let's discuss stdcall. This is the default convention used by Visual Studio when building plain C functions. stdcall stores its arguments entirely on the stack, in right-to-left order, followed by the instruction pointer to which the function should return: 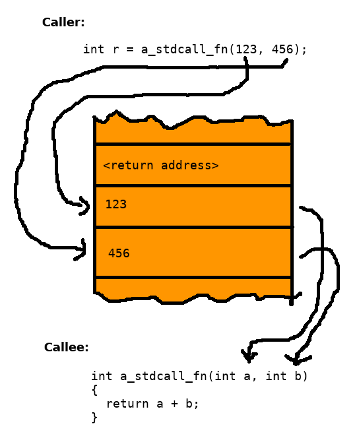 That makes sense. But what happens with a C++ call?

One way a C++ compiler could handle this is to treat the my_object pointer as a hidden parameter and pass it in to the MyCPPObject::doSomething function and then apply the normal calling convention for your platform:

This is the GCC variant of thiscall. Since we're only dealing with application code built by Visual Studio, we don't care about the GCC variant here, but it will sound familiar in a moment.

Visual Studio does something different. The Visual Studio version of thiscall is the same as stdcall, discussed above, but stores the this-pointer in ECX instead of on the stack: 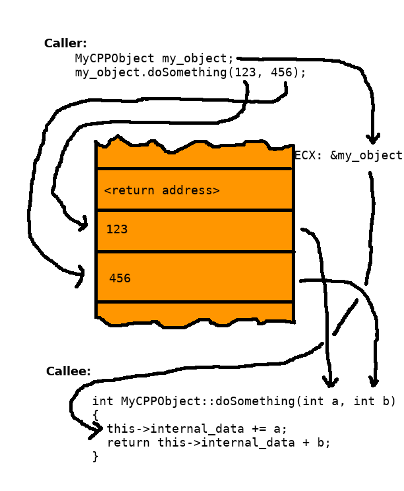 You can start to see where this is going. Let's take another look at the Wine-style, C language implementation of MyCPPObject::doSomething from earlier, after running it through the C preprocessor:

Don't worry about __ASM_GLOBAL_FUNC, it just contains the assembly language boilerplate to declare a new function. I also haven't gotten into how the vtable works or how the object is allocated, but know that __thiscall_MyCPPObject_doSomething is our entry point from the Windows application's code.

You can see from that snippet that __thiscall_MyCPPObject_doSomething first pops off the top of the stack, which contains the return address, into EAX, which we can clobber. Then it pushes the value of ECX and then EAX back onto the stack, then jumps to our real doSomething implementation, which is just below. Here's what happens to the stack before and after that transformation:

And now we've got a stdcall-compatible stack containing our this-pointer: 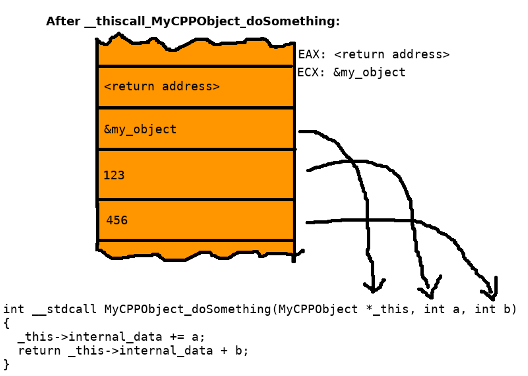 That's what it takes to convert a Visual Studio thiscall C++ call into a stdcall convention call that we can work with in a C language file, with no changes to the original C++ application.

Interested in learning more tips and tricks about Wine programming? Tell us about it in the comments section.

Curious about our contribution to the Wine project? Click here to learn more about it.

About Andrew Eikum
Andrew has been a Wine developer at CodeWeavers since 2009. He works on all parts of Wine, but specifically supports Wine's audio. He's also a developer on many of CodeWeavers's PortJumps.

This is really really nice. I hope there will be more of such technical posts on the CodeWeavers Blogs. I think it is very interesting for novice Wine developers.

Posted 2016-12-13 14:05
#2
Copyright © 1999-2022 All Rights Reserved · Privacy Policy · Code of Conduct
CodeWeavers or its third-party tools process personal data (e.g. browsing data or IP addresses) and use cookies or other identifiers, which are necessary for its functioning and required to achieve the purposes illustrated in our Privacy Policy. You accept the use of cookies or other identifiers by clicking the Acknowledge button.
Acknowledge
Please Wait...
eyJjb3VudHJ5IjoiVVMiLCJsYW5nIjpudWxsLCJjYXJ0IjowLCJ0enMiOi01LCJjZG4iOiJodHRwczpcL1wvbWVkaWEuY29kZXdlYXZlcnMuY29tXC9wdWJcL2Nyb3Nzb3Zlclwvd2Vic2l0ZSIsImNkbnRzIjoxNjU2NDMwODcxLCJjc3JmX3Rva2VuIjoiQVdkRmU0VXZNcXcyZlhXdCIsImdkcHIiOjB9