ZARJ and the NASA Centennial Space Robotic Challenge
by

So this is not a story about Microsoft Office, Crossover or any of our normal things. This is about two CodeWeavers engineers and their friends having some fun in their free time. Oh and it includes robots!  So if you are hoping for more juicy news about Android or Office 2016 you will have to tune in later, but didn’t I mention robots!

So to start things off Jeremy White has been coaching High School First Robotics for quite a while now. This year is the first year he was transitioning from full coach to assistant coach. So a number of his friends, including myself, started suggesting that maybe he needs to find a non-high school robotics competition to take a stab at.  Then we stumbled across The Space Robotics Challenge presented by NASA Centennial Challenged and NineSigma. It looked perfect, no entry fee, all done in simulation so it is completely a software challenge and what do you know, cash prizes.

So across the lunch table one day Jeremy and I said “I will be on a team if you are on the team.”  We roped in 2 other friends, Zach and Rebecca and at that moment team Zach, Aric, Rebecca, Jeremy (ZARJ) was born.  The #1 rule for ZARJ was to have fun! So the 4 our us started learning how to operate the simulation environment Gazebo, learned openCV, sharpened python skills and had fun.

First task was a pair of qualification tasks.  Basic ones, use stereo image processing to identify the location of a number of lit lights on a control panel and then to walk up to a door, push a button to open it and then walk through. We learned that over 400 teams signed up, and only the top 20  teams with the fasted door opening speed would pass the qualification round. So our “Have Fun!” rule became core. But Jeremy and I are geeks, and as geeks we love geeky challenges. So much to the chagrin of our wives we found ourself spending a lot of our free time watching a virtual robot fall down spectacularly over and over.

As the weeks went by our door time kept dropping, 13 seconds,  9 seconds,  8 seconds. We had automated scripts to tweak tiny variables; swing times, transition times, arm raise rates.  We started to get excited! A subset of the teams had started participating on a Facebook group and it was looking like our times were pretty good.  7 seconds!  We were really excited.  Then Jeremy had a break through where we tried something crazy with swinging the robots arms pretty dramatically while walking.  6.5 seconds!  It was passed to me and I worked in pressing the button without breaking stride, further tweaking and we finally submitted our qualification with 6.3 seconds!

We qualified!  Not only that but of the teams who times we know about we were second fastest! 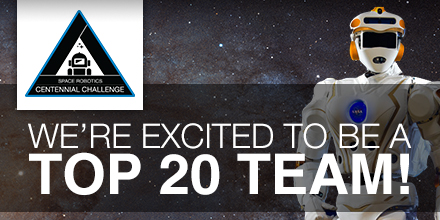 Then suddenly in the office things changed from James exasperatedly shouting “Robots!” every time he overheard us, to ... ok well that did not change. But it does mean that team ZARJ is moving on to the full challenge where now we have to align a communication array, deploy a solar panel and fix a leak in a habitat.  But our primary team rule stays the same. “Have Fun!”

If you want to follow team ZARJ, understand we are all engineers and not social media gurus, but we are on twitter at @ZarjRobotics, and our blog is http://www.zarj.org and understand that CodeWeavers developers are totally geeks even off the clock.

Copyright © 1999-2023 All Rights Reserved · Privacy Policy · Code of Conduct
CodeWeavers or its third-party tools process personal data (e.g. browsing data or IP addresses) and use cookies or other identifiers, which are necessary for its functioning and required to achieve the purposes illustrated in our Privacy Policy. You accept the use of cookies or other identifiers by clicking the Acknowledge button.
Acknowledge
Please Wait...
eyJjb3VudHJ5IjoiVVMiLCJsYW5nIjpudWxsLCJjYXJ0IjowLCJ0enMiOi02LCJjZG4iOiJodHRwczpcL1wvbWVkaWEuY29kZXdlYXZlcnMuY29tXC9wdWJcL2Nyb3Nzb3Zlclwvd2Vic2l0ZSIsImNkbnRzIjoxNjczNjM5MzYzLCJjc3JmX3Rva2VuIjoidHJHSEVFTXF6U2E0cU5teCIsImdkcHIiOjB9