The Promise of the ‘Cloud’
by 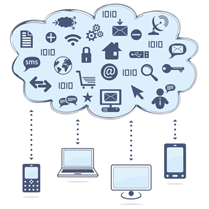 Remember three years ago when EVERYONE in tech was talking 'cloud'? IBM was the loudest voice in the cloud-based conversation. Microsoft and Google were openly demonstrating tools for controlling the cloud. Amazon was projecting how the cloud would impact the lives of all consumers. Yahoo, Apple, and Salesforce.com were all touting the cloud too. It was as if an inevitable storm 'cloud' was going to light up the entire technology landscape and drench the Internet. And yet three years later, technology feels largely unchanged and 'cloud' feels more like a buzzword (like synergy or hyperconvergence) than a real technology term.

To be fair, everyone is using the 'cloud' in some way, shape, or form today. FaceBook is a social cloud; Netflix is an entertainment cloud; and iCloud, from Apple, is most certainly a cloud for backing up all forms of media. If you want to know in real time when your bus will actually be at your bus stop or if you want to use Uber or Zipcar to get to your destination, you use a cloud. You even 'tweet' in a cloud (and again, no one wants to see what you ate for lunch, but I'd love for you to follow me on Twitter @jbramey or my company @codeweavers). But for all that people 'touch' clouds, the primary purposes for the cloud are backing up big data; file storage; and disaster recovery. And while being able to access all your documents on GoogleDrive or synching your music across all your Apple devices is cool, it's not the life changing experience that was initially promised by the tech giants. Or maybe, the tech giants weren't talking to consumers when they proclaimed that 'cloud' was going to change the world.

Collecting and extrapolating large amounts of consumer data is one of the many 'benefits' of the cloud. Have you noticed recently when browsing the Internet that many of the ads plastered inside the banners of these web sites are for products or services that you use or might want to use? Have you received any recent e-mail product offers that you'd actually consider buying? What about getting a discount code mailed to your door that appears about the time you are looking at making a purchase? It's not an accident that Red Robin sends you an e-mail roughly a month after you eat at one of their restaurants with some new menu item you might find appealing. It's not a coincidence that Amazon just happens to have your sized jacket on sale (you know, the leather one you love so much). Nor is it just dumb luck that you happen to see the same ads for the same products on the two or three websites you visit while drinking your morning coffee. No, it's not an accident, coincidence or luck at all.

Companies no longer have to go through the painstaking task of compiling information about their customers. Instead, they 'tap into' the vast collective of data streams made available in the cloud by Google, Amazon, FaceBook, and others to quickly spot market trends, determine future behavior, and capitalize on the opportunity. CodeWeavers is also using the 'cloud'. We gather several data points about the applications our customers are using and want to use in CrossOver to build a better more meaningful technology.

And while all that might sound wicked and evil, the truth is that consumers are getting more of the products and services they want at prices they find reasonable (even aggressive) with little to no additional effort on their part. You mean I get what I want, when I want it, at a price I can afford without having to ask, 'YES, PLEASE!!!'. And companies are learning significantly more about their consumers so they can provide the goods and services they actually want. So while this 'cloud thing' hasn't appeared to impact our lives one single bit, the reality is that the tech giants were right in that the technology landscape dramatically changed. It's just doing it in a way that requires very little effort on our parts. And that's the REAL promise of the 'cloud'.

Copyright © 1999-2022 All Rights Reserved · Privacy Policy · Code of Conduct
CodeWeavers or its third-party tools process personal data (e.g. browsing data or IP addresses) and use cookies or other identifiers, which are necessary for its functioning and required to achieve the purposes illustrated in our Privacy Policy. You accept the use of cookies or other identifiers by clicking the Acknowledge button.
Acknowledge
Please Wait...
eyJjb3VudHJ5IjoiVVMiLCJsYW5nIjpudWxsLCJjYXJ0IjowLCJ0enMiOi01LCJjZG4iOiJodHRwczpcL1wvbWVkaWEuY29kZXdlYXZlcnMuY29tXC9wdWJcL2Nyb3Nzb3Zlclwvd2Vic2l0ZSIsImNkbnRzIjoxNjUyNzI4NDY3LCJjc3JmX3Rva2VuIjoicHh3TmdZYlVmNGVnNmc4cSIsImdkcHIiOjB9