CrossOver for Android RUNS on ChromeBooks!
by 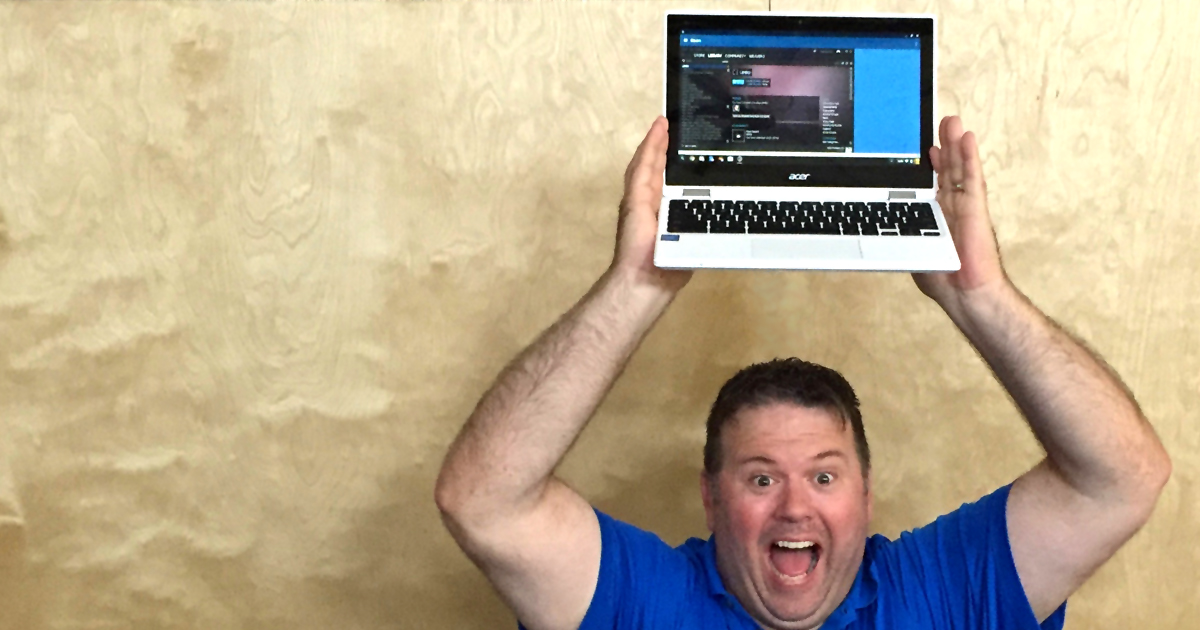 Sometimes, you find yourself staring at something you could never have imagined being possible based on its humble beginnings. The Wright Brothers pilot the airplane for 12 seconds; then, Neil Armstrong lands on the moon. The first microcomputer kit is made available in 1975; then, 120 million computers are sold in the world so far THIS YEAR! The Patterson–Gimlin video captures Big Foot on film in 1967; then, Big Foot stars in a series of beef jerky commercials. No one could ever have predicted that these initial events would lead into much bigger and better things.

In 1996, CodeWeavers was started with the single goal of making Windows based applications run on Linux computers. It was the simple, honest, and noble goal of our founder, Jeremy White. In 1996, the technology pundits were convinced that Linux was set to take over the world. The only outstanding obstacle for the Linux platform was running Microsoft Office software. Hence, CrossOver was born (maybe more or less hatched). In 1996, there were no smart phones, no tablets, no Android, no Google, no Pokémon Go. There was no indication that computers would be more mobile, more connected, or more compact. And yet, here we are today.

So where is ‘here’, you ask? TODAY, Google released Android for Intel based ChromeBooks. AND CrossOver for Android installed and ran on a Google ChromeBook. More importantly, we were able to install the Steam Client into CrossOver for Android and run LIMBO and other games. MORE IMPORTANTLY, we have DirectX 9 support, keyboard support, mouse support, and sound support TODAY!!! PEOPLE, we are staring at a Leprechaun riding on the back of a Unicorn while taking a picture of a UFO. We are running CrossOver through Android on a ChromeBook running a Windows based game launched from the Steam client. THIS HAS NEVER BEEN DONE BEFORE…EVER!!!

There will be more testing. There will inevitably be some cleanup work to do. There will be . BUT… CrossOver for Android is working and real and supporting the Steam Client and able to launch games and is actually playable. From our most humble beginnings, I don’t think anyone, Jeremy White included, ever dreamed that CrossOver would be able to run on ChromeBooks. And yet, here we are with people flying planes, people landing on the moon, and Big Foot. I’d say that’s pretty rare company for a small software developer from Minnesota.

If you are interested in testing CrossOver for Android when it's released, send an e-mail to android@codeweavers.com. You’ll be part of the very first group of people to witness this next evolution of technology for your very own. More to come soon!!!

To stay up to date with all of our CrossOver Android news, sign up our exclusive Android technology preview email list.

Congratulations for this big step to make possible run windows programs on androidx86 based system.
Guys, did you tried the same test on remixOS or phoenixOS?

This is fantastic. I keep telling everyone that Chromebooks are going to become a solid platform, and with this addition it got even better.

Great!
Linux is becoming what I knew it could be.

All my chromebooks are ARMHF based...
What would be interesting though is crossover linux for ARMHF 😊.
I know I can run exagear desktop, but crossover with integrated i86 emulator would be very nice, with direct X to opengl-ES.
It would work great on android-armhf as well as any linux on armhf (I hope 😉 ).

I would love to test this out as I work daily on an Intel based Chromebox CN62 with 16 gigs of ram. Love to try out vsthost and get some Windows VST's running on ChromeOS!

Interesting. I have been running Windows apps on intel based Chromebooks for a while now.. enable developer mode, install crouton, install wine, install world of Warcraft.. I get about 20 fps on an Acer c720. I also run the teachers student management software, Firefox, full java, etc. Only negative is the boot screen 'hit any key to exit developer mode'.... Oh and for warcraft, I have a 64 gig microsd card plugged in.

will it run in chrome using Arc welder?

Do you find that the Android container adds additional overhead that you wouldn't see on a bare metal Linux install?

When Crossover for Android is on a stable release and is for sale, I will be purchasing it. Currently, we use Crossover Mac on two machines to run MS Office 2010. It's quite amazing to see Windows apps running natively on a Mac. It's like watching Lance Burton in Las Vegas. Stunning.

That said, I just bought a brand new Acer Chromebook 14 with an Intel quad core and 4GB of RAM. Can't wait for Crossover for Android.

Hello. I was wondering if it has happened yet because i have a Samsung chromebook series 5 and i am trying to find Crossover. Please Respond. Thank you.

using the codeweavers,for example,if you use the windows media player,the app have sound?

I've been waiting a long time now and extremely interested in this software. I'm using a Chromebook Pixel and would love to help test out this software and to see what kind of feasible applications I could use on it. Can someone please permit me to try it out? I'd be totally willing to provide feedback and contribute to the project.

Copyright © 1999-2022 All Rights Reserved · Privacy Policy · Code of Conduct
CodeWeavers or its third-party tools process personal data (e.g. browsing data or IP addresses) and use cookies or other identifiers, which are necessary for its functioning and required to achieve the purposes illustrated in our Privacy Policy. You accept the use of cookies or other identifiers by clicking the Acknowledge button.
Acknowledge
Please Wait...
eyJjb3VudHJ5IjoiVVMiLCJsYW5nIjpudWxsLCJjYXJ0IjowLCJ0enMiOi01LCJjZG4iOiJodHRwczpcL1wvbWVkaWEuY29kZXdlYXZlcnMuY29tXC9wdWJcL2Nyb3Nzb3Zlclwvd2Vic2l0ZSIsImNkbnRzIjoxNjUyNzI4NDY3LCJjc3JmX3Rva2VuIjoibXhzNXdVUXp2YzZKZUVYMyIsImdkcHIiOjB9