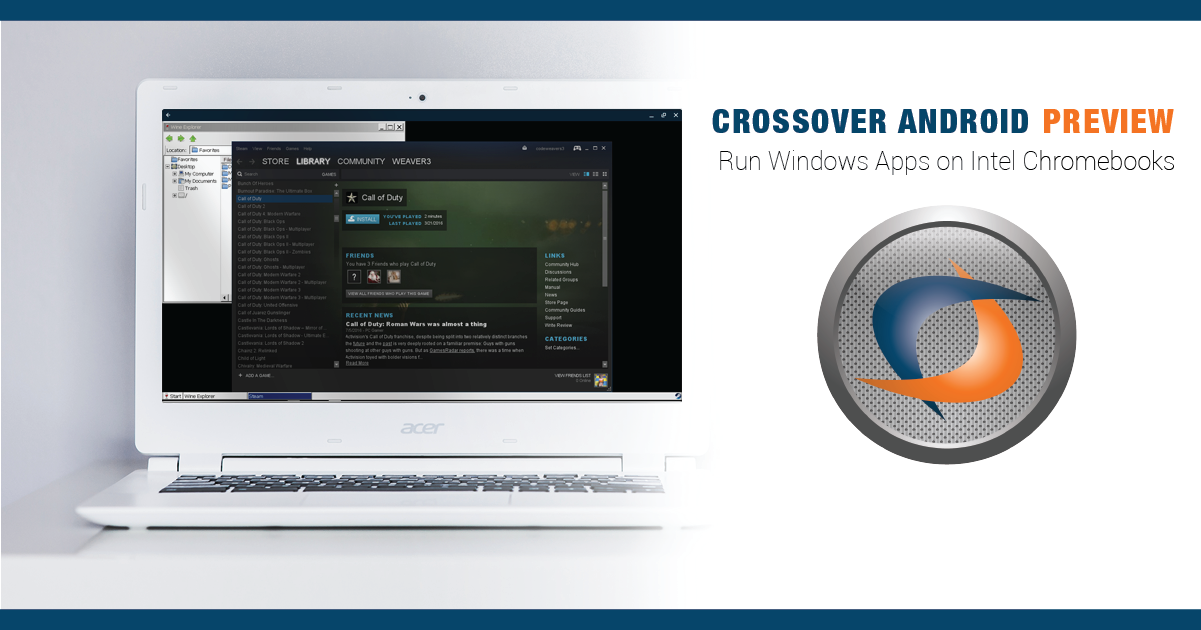 Think about this…When this development started, there were few, if any, Intel based phones. When this development started, there were no Intel based tablets. There was no X86 Android project. There were no Intel based laptops or clamshells. Our development team essentially built a solution for a problem that could not be solved or fixed. At best, they were building a hypothetical solution to prove that it could be possible to run Windows based applications on an Intel Android device. It’s like Henry Ford building a car for a population that didn’t have roads; or Thomas Edison creating a light bulb for a population that didn’t have electricity. And yet, here we are…

Allow me to clearly state that like the first Model T’s and the very first light bulbs, CrossOver Android is far from perfect. It will run a very limited number of Windows applications (some because they just aren’t supported yet on Android and some because Android doesn’t / won’t support them at this time). The former implies that our support isn’t good enough, yet. The latter implies that Android does not have some key components, like OpenGL, to run some Windows applications. AND there is a point to make that some devices just doesn’t have the RAM, disk space, or processing power necessary to run a Windows application. And some devices, like phones, just don’t have the physical screen necessary to make running a Windows application all that appealing. Needless to say, your ‘mileage’ as to how useful CrossOver Android will be come tomorrow will vary.

So what do you NEED to know to make the CrossOver Android Tech Preview as useful as possible for you at this time? 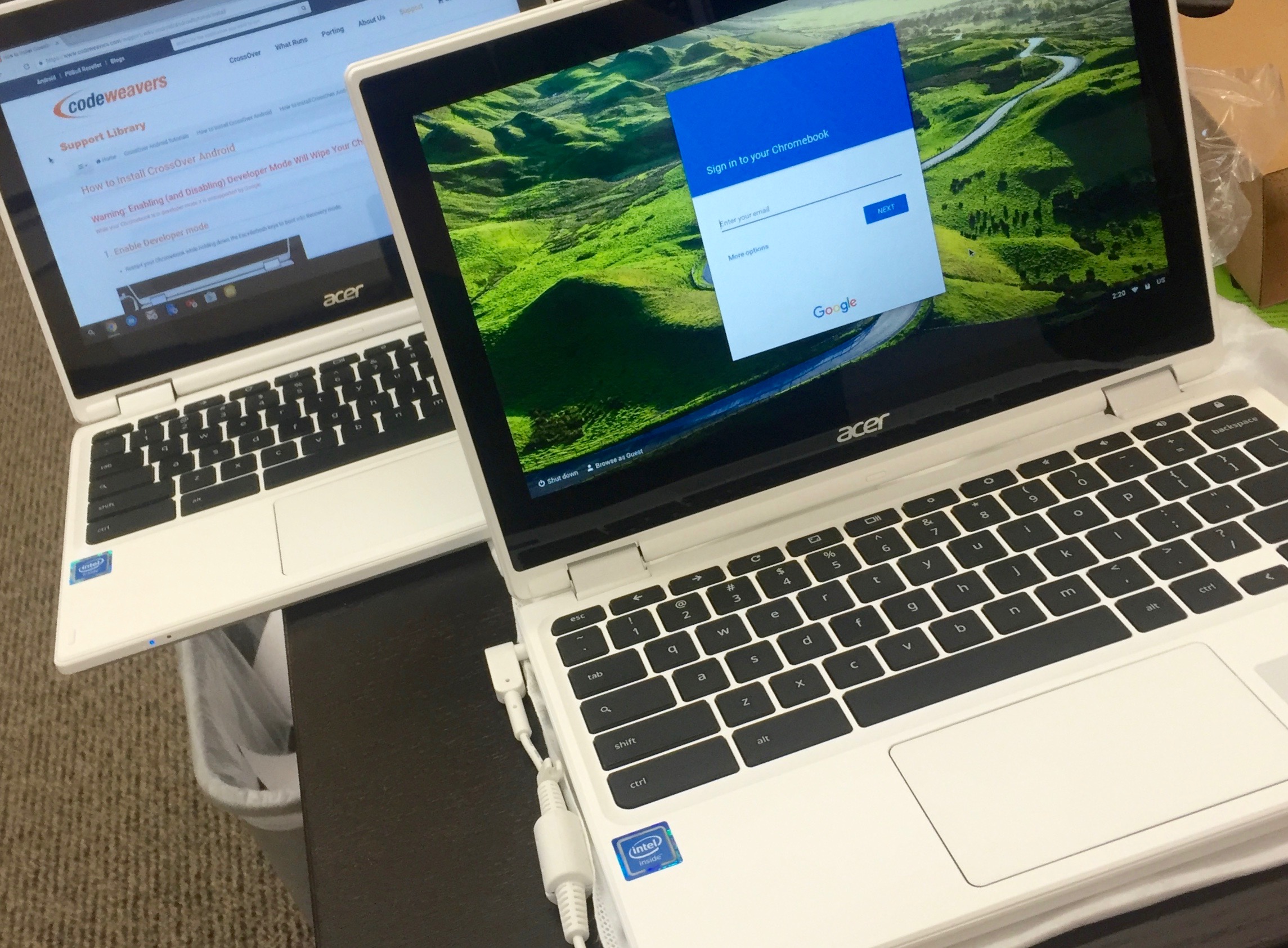 Finally, you need to have an open mind. The first Model T didn’t race down the highway at 100 MPH. The first light bulb didn’t last for 2000 hours before burning out. CrossOver Android is a Tech Preview. It does some very cool things. It does run Steam. It does run Office 2010. It does run Wizard101. It does not run EVERY WINDOWS APPLICATION KNOWN TO MAN.

The Top 3 Reasons We Let Kids of CodeWeavers Play Wizard101

So be patient with us. We ARE committed to making the software better and better and better with each passing release. And maybe someday, CrossOver Android will race down a highway at 100 MPH. Who knows??? When we first started development, we didn’t even have a target device in mind (and look at where we are today!!!). When we move from Tech Preview to possibly an Alpha and then straight to a Beta and then to Release Candidate and then to version 1.0, who knows what we’ll be capable of doing? Heck this Androidism thing might just be the start of a technology revolution. We may all be on the front lines of the NEXT BIG THING. (I should probably trademark Androidism now while I have the chance).

Microsoft Office on Chromebook Coming in our Next Tech Preview

I'm afraid you forgot to mention that at the moment only Asus Flipbook, Acer Chromebook r11 and the 2015 Pixel support Android apps.
Thus, if I'm not wrong, you dont need just a generic Intel chromebook, but you specifically have to use one of those 3 laptops.
Is this correct?

Hi
First of all, geat work this could be awesome...
Ok, I have an Acer c270p. Has 4 gb ram & touchscreen
Already in dev mode cause I've installed 128gb ssd drive.
BUT it's not supported by Google for Android apps
Therefore I cannot run apk. File, does your system get around this somehow,?
Or do I have to wait and see if Google update this machine kernel.

Apparently if your Chromebook is not on Google's list of supported machines you are looked out of the play store. Oh well, there's still Crouton with WINE.

I have two questions.

Thank you for answer.

Please, what are the minimum hardware requirements? Will it run on any mainstream intel android tablet with 1GB ram?

Well, potective can Express flaws: 1)No support for sd card, and this is extremely important and necessary! 2)not a single app or game I couldn't run my PC to my tablet, only those that are offered by the software and you need to download and buy for the most part. 3)No configuration of the controller control.
P.S. I certainly understand that this is an alpha version, but need a program which supports sd card(sd flash card) and which supports my apps for PC a games.

Anyone have an apk? I want to see if you can run it on a Chromebook which doesn't have the Play Store.

At this time, you are correct for Chromebook. However, Google will be adding more devices that meet the Intel requirement within the next couple of months (maybe sooner). AND (big AND) CrossOver will run on many Android tablets that have Intel processors. So, its not really an oversight on my part as more and more devices are coming and we do run on other Android / Intel devices right now.

Yes, you may have to wait until Google flashes the machine kernel. Because we're using the Google Play Store as the distribution point for the .apk, I don't see a solution around this yet.

Yes, there is crouton with WINE. We're the WINE guys (the developers supporting WINE) so we're very familiar with that solution too.

Yes, this is based on WINE.
The minimum Android requirements are an Intel Processor and Android 5.0 or newer.

Minimum hardware requirements are Android 5 or greater; Intel processor; 2 GB RAM is preferred (but it might run on 1 GB - the Windows application you are trying to run may not run great as a result); and about 80 MB of disk space.

No support for SD Card YET! That's a feature we believe is coming soon and is critical because of the size of Windows applications. It's just a very difficult problem that we are working to fix. There is a very limited number of games that work on the tablet. You do understand Android has zero support for OpenGL? And we're still working to make this better? Sso not all games are going to work. But I think we do have configuration of controller support as I believe that does work (at least it does in Linux)

And I do question whether or not you understand that this is a Tech Preview. It's pre-Alpha. We plan to continue supporting more and more features and more and more Windows applications in the coming weeks and months.

Running on an HP Revolve 810 G2; Intel i7-4600 12gigs ram 256Gb SSD with touch.
OS: Remix OS for PC's Marshmallow; Antutu score for system 186900.
Tested a few home brewed apps no issue so far so good, will test further in the next few days with other mainstream apps.

This can run on any x86 computer running Android.

Androidx86 project installed to a lot of system. I personally am running Remix OS for PC's but there is also Phoenix OS which people like as well.

So no it is not just for Chromebooks it is for any x86 PC running Android.

yes this works very well on x86 android/remixOS....
its very fluid for my used apps thus far:
i have tested and use Flash player 22.0 for firefox under this on remixOS as i dont loggon to windows anymore, MS office works well including the WPS office and obviously OO 4.x, adobe acrobat XI also works brilliantly...
I installed some apps that required use of Runtim libraries(c++2005/08/10/12/13/15 all install correctly), .Netframework 4.6.2 and directx 2010 work!
....most portable apps/suites work flawlesly, ccleaner works all versions i tested
games i tested and seen working:
ubisoft scrabble international,crazy taxi3,Brian lara international cricket 2007 opens and FC,
BUT THIS IS VERY GOOD CONSIDERING ITS AN ALPHA....i can even access my amain storage/NTFS drive mounted under RemixOS as SDCARD(2TB) and install apps to it and use portable apps from it!
...online streaming is not laggy using flash player via firefox, sound is perfect no glitchy either!

I have an Asus Chromebook C100P Flip. It has a Rockchip 3288-C processor which I think is ARM based. Is that correct? I already have the Play Store running on it.

Yes, you may have to wait until Google flashes the machine kernel.
Because we're using the Google Play Store as the distribution point
for the .apk, I don't see a solution around this yet.

Signed but havent got the .apk link to install!!!
i am running Remix OS for PC on a dell desktop

I'm disappointed to see that my Nexus Player from Asus isn't listed as supported in the Play Store. Is there a reason for that? It's an x86 Android device with a Atom Z3560 on Android 7.

Unable to use the app

Unable to use this App, please guide.

If this ever gets to the ARM side of the market, I'd love it. There are some programs that just don't have a good (or even crappy enough to be workable) alternative on mobile. It might me a stretch to hope for ARM support, and I know it would have more bugs than a bikers smile, but I'd give it a shot to see if it works.

Copyright © 1999-2022 All Rights Reserved · Privacy Policy · Code of Conduct
CodeWeavers or its third-party tools process personal data (e.g. browsing data or IP addresses) and use cookies or other identifiers, which are necessary for its functioning and required to achieve the purposes illustrated in our Privacy Policy. You accept the use of cookies or other identifiers by clicking the Acknowledge button.
Acknowledge
Please Wait...
eyJjb3VudHJ5IjoiVVMiLCJsYW5nIjpudWxsLCJjYXJ0IjowLCJ0enMiOi01LCJjZG4iOiJodHRwczpcL1wvbWVkaWEuY29kZXdlYXZlcnMuY29tXC9wdWJcL2Nyb3Nzb3Zlclwvd2Vic2l0ZSIsImNkbnRzIjoxNjU2NDMwODcxLCJjc3JmX3Rva2VuIjoiUGtLOHhwZnR3ZnMzY21ocyIsImdkcHIiOjB9