Steam Deck — Is it Love or is it a Game Changer?
by 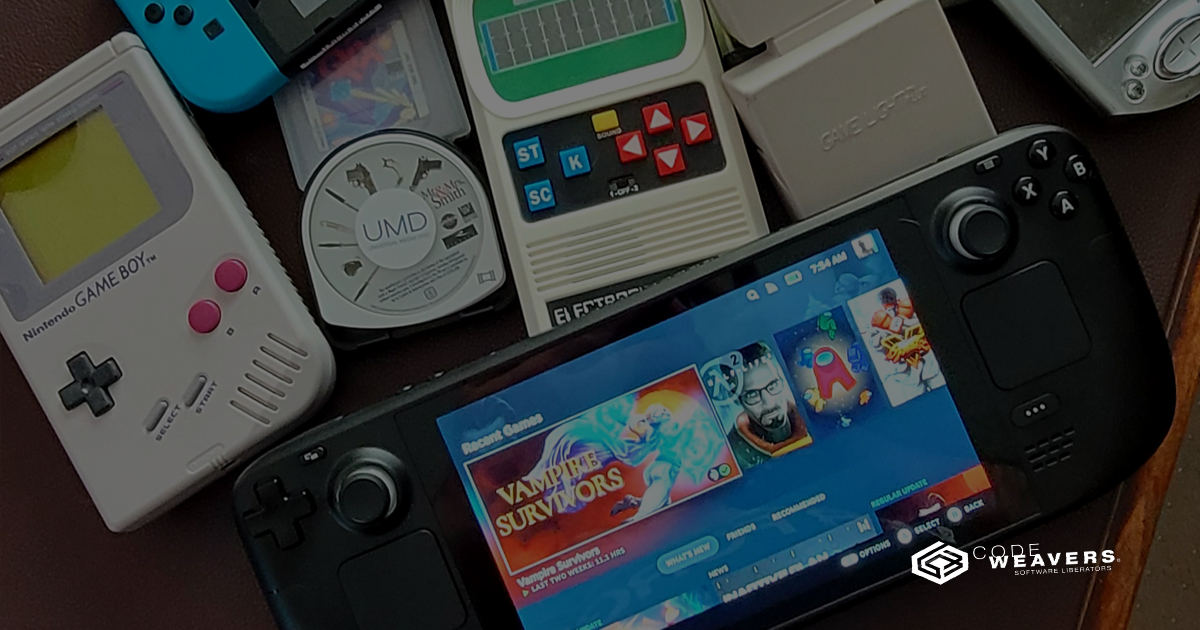 To be very transparent, I’m a HUGE fan of the Steam Deck. I’ve been enamored with portable gaming since I was a 10-year-old. The thought of playing a game wherever I am, whenever I want brings a smile to my face. I’ve spent thousands of dollars on portable gaming over the years. My collection includes two Nintendo Gameboys, a Compaq iPAQ (their handheld touchscreen device — it was a 90’s thing), two Sony PSPs, a Nintendo Switch, and dozens of laptops and cell phones; I am ‘pot committed’ on portable gaming. So, when I first heard about the pending arrival of the Steam Deck, I immediately fell in love (with portable gaming) all over again.


In full transparency, portable gaming hasn’t always loved me back (or at the very least not as much I’ve committed to loving it). It all started back in college… it was the early 90’s,  Mariah Carey was dominating the Billboard Hot 100, and portable gaming became a ‘thing.’ Her name was Gameboy. The Gameboy was great — but it was a small,  green screen device with a relatively limited number of fun games. Still, I was smitten with portable gaming, and I’ve courted each and every portable gaming platform since.

There was the Compaq iPAQ, a full color version of the Palm Pilot PDA. It was revolutionary; it used a stylus, and had a touchscreen. Alas, there was a complete dearth of games and content designed for it. Not to mention, connecting to the internet or synching it with a computer required a suitcase of accessories, so doing anything meaningful with the iPAQ was an arduous affair.

Then in the early 2000’s, Sony's PSP became my go to device. It was beautiful. It was elegant. It had hundreds of compatible games and movies. ABOVE ALL ELSE, it was portable. I thought it really was TRUE LOVE. I spent hundreds of dollars on my PSPs. I bought cases, games, movies, and storage systems. I invested, because I was going to settle down and never consider another platform. I dealth with the high cost of games. I saw past the sandboxed connectivity, and even overlooked the fact that the proprietary cartridges couldn’t be played on anything else. In retrospect, I should have known the relationship was doomed to fail. Spending $40 for a game that wasn't playable on my computer or anywhere else wasn’t a winning proposition. I heard the ‘death knell’ clearly when the buttons and game sticks on both PSPs started wearing out and eventually stopped working. I tried, believe me I tried. I took the PSPs apart, replaced the pads, fixed the sticks, but it was never the same. I was scarred. I mean you know your heart is broken when you refuse to even consider the ‘next big thing.’

That next big thing was the Nintendo Switch. I didn’t go out and buy the Nintendo Switch on day one. I didn’t buy it on day 100. Fact of the matter is, I waited a few years before wading into the portable-gaming pool again. Oh my friends told me how much fun they were having. Everyone I knew owned one, and they all LOVED it. The portability, the color screen, the content, the games, the connectivity to the Internet, the intuitive controls, and option to play on handheld or on a large screen. I sat on the sidelines, afraid of being hurt again.

It took COVID, my wife, and an unexpected Father’s Day gift to coax me off the sidelines and playing the Switch. Truth be told, I was IMPRESSED. There were hundreds of fun games available. At reasonable prices, too. Games on cartridges and games available for download via the Nintendo eShop. I caught myself thinking... this is the one, this is the LOVE of my life. I was hooked. BUT… over time, I started to fall OUT of love with the Switch. The screen resolution was good, but not great — definitely not great on my TV. The controllers seemed to contract drift. The games were good, but the selection of great games (like AAA rated titles) was almost non-existent. The titles ported to the Switch were just shells of their PC versions (Crysis, Borderlands, Diablo II). I mean, it was still good, the Switch brought me joy, but it the relationship had a hard ceiling. If you LOVE Mario, the ceiling is much higher.

When I first heard rumors about the Steam Deck, I was intrigued. I felt those all too familiar butterflies… I wanted this device to be THE device; the one I have been searching for all these years. This past week I finally got to spend some quality time with a Steam Deck. Dare I say it? I think I’m in LOVE again. To be fair, it’s only new love at this point. The screen and resolution of the Steam Deck are great. It just looks beautiful. The controls are mostly intuitive. I had to reprogram my thinking to use the ‘A’ button vs. the ‘B’ button on the Steam Deck (on the Switch you use the ‘B’ button to confirm). Once I got past that, I found the controls to be really smooth. The Steam Deck feels SOLID in my hands. The build quality feels good, not soft. The buttons and pad look and feel the same as my other xBox controllers. The game sticks feel sturdier than those on the PSP but are exceptionally responsive. The trackpads (which is really new to me outside of a laptop) are precise. I really haven’t used the trackpads much because the other controls are equally good. Connecting my earbuds to the Deck via Bluetooth connection was a breeze. Overall, I like the Steam Deck in my hands.

As for content, this is far and away the strongest selling point for the Steam Deck. It is also why I think this one is the one and will outlast all my previous love affairs. I’ve played Half-Life 2, Vampire Survival, Street Fighter V, and a bit of handful of other games. Every game I have played has played great on the Steam Deck. I’ve read the blogs. I’ve watched the podcasts. To the critics, you are right, not EVERY game runs on the Steam Deck…. yet. Over the past two weeks, some 400 titles have been labeled Deck Verified, and that list is just keeps growing. Though optimized for the Steam Deck, the Steam Store still feels familiar. Within minutes of turning on the Steam Deck, I was able to login, purchase a game, and begin the download. The best part? The Steam Deck doesn’t mind if I hang with my old friends. I can play these games on my Steam Deck. I can play them on my PC. I can play them on my Linux box. In the not-so-distant future, I am guessing I will be able to connect to and play on my TV.

I have this vision of a future where I’m able to leave my laptop at home and use the Steam Deck when I travel. Bluetooth keyboard and mouse (check), connection to hotel TV (check), portable gaming device/e-mail/web/office apps all in one (check, check, check, check, and check). That’s much sadder than it reads — the 10 year old in me is dying. BUT, it feels like the Steam Deck could be that device. It is more than a gaming platform. It’s a GAME CHANGER. It's the type of device that people could build their lives around — or in this case their gaming and technology habits. The automobile allows people to easily traverse our country. Mass transit allows people to live in the suburbs and commute into the city. The Internet connects markets to goods and services in ways we are still grappling with, and it is quite possibly the best (only?) place to see so many itty bitty pitties smiling. At one point or another, all these technologies were doubted, but they have all profoundly changed the world. I am sure there are skeptics, but I don't find it far-fetched to think that a super high-end and extremely portable gaming device will completely change how we interact with video games AND for that matter technology.

I can hear the critics screaming in the background. The battery life? Linux usability? The number of games? What about Fortnite? What about the dock? The weight and size of the Steam Deck? All fair concerns. BUT… I think a bit premature. No one thought people (real people) would ever own computers — they were as big as a house. Now, most people, carry a computer on their person and hold it in their hand. No one thought that people would ever buy the automobile — expensive and there wasn’t much for roads. Today, millions of people drive cars and trucks each and every day. The thing about a game changer is that in its raw, initial state, it doesn’t look like much. But if you build something that is easy to use, with lots of content, intuitive controls, and countless applications, it is easy to see how it could change everything. Maybe I’m just that 10-year-old gamer again, foolishly in love with the next great platform. Or, maybe, this is THE game changer I’ve been waiting on for 40 years. I'm not sitting on the sidelines this time, I am leaning into a future where the Steam Deck changes everything.

Copyright © 1999-2023 All Rights Reserved · Privacy Policy · Code of Conduct
CodeWeavers or its third-party tools process personal data (e.g. browsing data or IP addresses) and use cookies or other identifiers, which are necessary for its functioning and required to achieve the purposes illustrated in our Privacy Policy. You accept the use of cookies or other identifiers by clicking the Acknowledge button.
Acknowledge
Please Wait...
eyJjb3VudHJ5IjoiVVMiLCJsYW5nIjpudWxsLCJjYXJ0IjowLCJ0enMiOi02LCJjZG4iOiJodHRwczpcL1wvbWVkaWEuY29kZXdlYXZlcnMuY29tXC9wdWJcL2Nyb3Nzb3Zlclwvd2Vic2l0ZSIsImNkbnRzIjoxNjczNjM5MzYzLCJjc3JmX3Rva2VuIjoia2NDdWdYeW5Tcnl5YnlwaCIsImdkcHIiOjB9