Important Information These are community forums and not official technical support. If you need official support: Contact Us

Jessica-Marie Gervais
It only took them from 2017, but Literature & Latte FINALLY released the Windows version of Scrivener 3.0. *insert "Hallelujah Chorus here*

Whups, accidentally downloaded and attempted to install the 64 bit instead of the 32. Fixed that.
I uninstalled v1.9.x before trying to install.

Now, for some reason, I have Scrivener and Scrivener 2 bottles, neither of which want to open past the splash page.

This is problematic for me, because Camp NaNoWriMo is starting April 1, and I want to participate in it.

It still doesn't want to start past the splash screen.

We are aware of the issue and have a bug filed to track it.

Jessica-Marie Gervais
Awesome! It's weird how my Pixelbook Go is 64 bit, yet it won't install via CrossOver 64 bit Windows programs.

Mattias Ahlvin
I ran into this issue too yesterday while trying to get Scrivener 3 for Windows to run.

You need to install the Speech SDK 5.1 into the bottle. You can find it under "Non-Applications" in the "Browse Available Applications" section.

After that, Scrivener loaded right up.

In general, I use Scrivener on Linux using Wine and most of the time, the Speech SDK solves any problems with Scrivener loading. It doesn't always seem to be required though for some odd reason. For example, I can install Scrivener 3 on the Crossover for Chrome OS Android app and run it without the Speech SDK just fine. 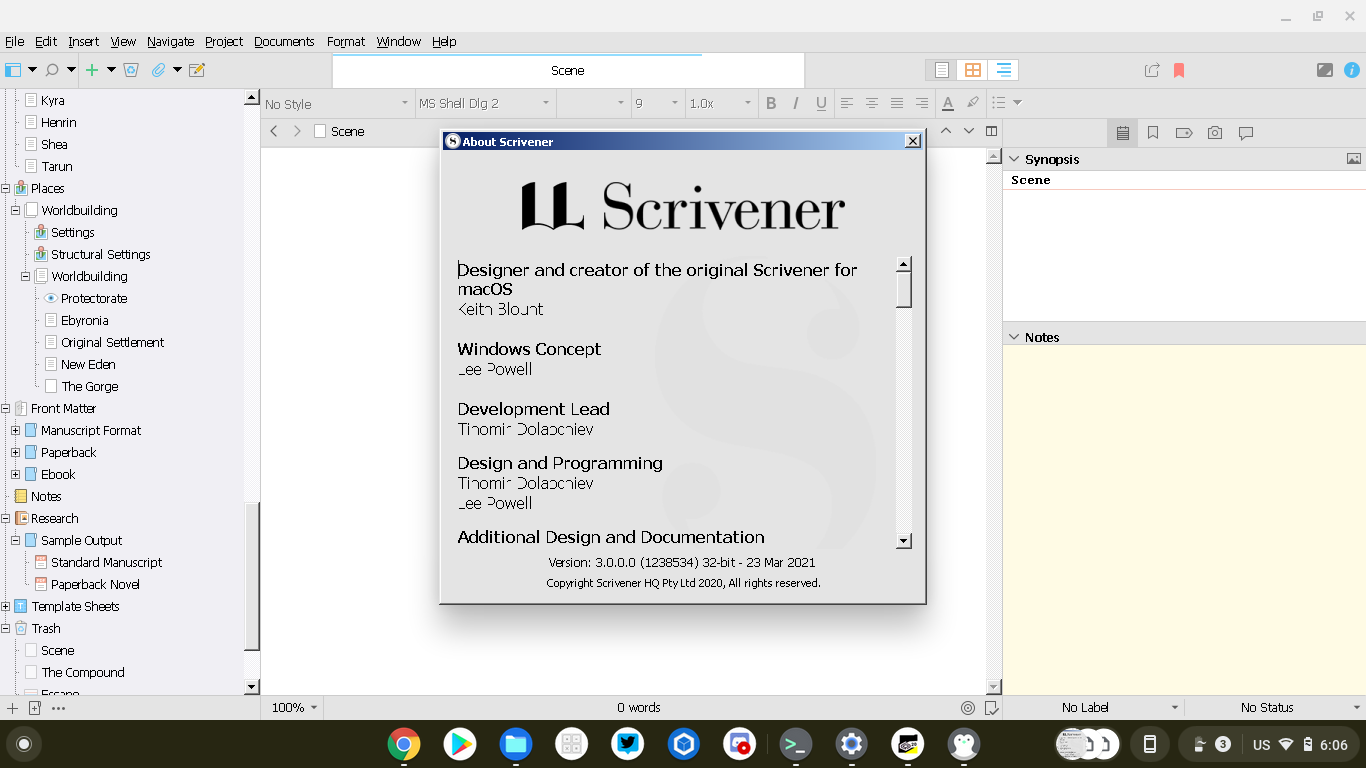 Jessica-Marie Gervais
That sounds fantastic! I just tried it out today and ran into a problem.

I can find the Speech 5.1 thing you described and install it to the right bottle, but there is no installer; I don't have any .exe or .msi files to choose from. Could you give steps on how to find it?

Jessica-Marie Gervais
Ugh. I hope the update comes soon. The named component was difficult to find, as Microsoft offers a 404 error when the link is clicked. But, I found it and installed it to the bottle.

The "yay it worked!" moment was soured by how my license wasn't accepted. That was an L&L issue for getting the free upgrade to v3.0. (**click on upgrade from older version option**)

Then, after all of that, I can't get the license to activate. I tried installing the missing *.NET v4.6.2 and the version above into the bottle, but no luck. The License Manager suffers a fatal error and tells me "Could not establish a connection to the license server. Please try again."

The L&L solution: copy the generated coupon, go to their website, and "buy" it.

Please Note: This Forum is for non-application specific questions relating to installation/configuration of CrossOver. All application-specific posts to this Forum will be moved to their appropriate Compatibility Center Forum.

Copyright © 1999-2021 All Rights Reserved · Privacy Policy
CodeWeavers or its third-party tools process personal data (e.g. browsing data or IP addresses) and use cookies or other identifiers, which are necessary for its functioning and required to achieve the purposes illustrated in our Privacy Policy. You accept the use of cookies or other identifiers by clicking the Acknowledge button.
Acknowledge
Please Wait...
eyJjb3VudHJ5IjoiVVMiLCJsYW5nIjpudWxsLCJjYXJ0IjowLCJ0enMiOi02LCJjZG4iOiJodHRwczpcL1wvbWVkaWEuY29kZXdlYXZlcnMuY29tXC9wdWJcL2Nyb3Nzb3Zlclwvd2Vic2l0ZSIsImNkbnRzIjoxNjM4Mzc3ODkzLCJjc3JmX3Rva2VuIjoienUyZmRrV250cjM5U3N2eSIsImdkcHIiOjB9