Introducing CrossOver 22 (Psst, It's double the fun of CrossOver 11).
by

CrossOver 11 was an e pluribus unum moment. CrossOver went from CrossOver Games and CrossOver Pro to “just” CrossOver. You could say CrossOver got comfortable with just being itself (ala Mitch Hedberg).

CrossOver 22 is about multiplication! If only because 22 is… well, 11 x 2, and it is two twos (technically a palindrome)… it is about bounty… beauty and grace… but really…

The hallmark of the CrossOver 22 release is a complete redesign of the user interface (now with twice as many cupholders) for macOS, Linux and ChromeOS. Before this redesign, the last time we made significant UI changes was in CrossOver 15, and the last time we did a major overhaul of our UI on all platforms was CrossOver 9. Clearly, we were overdue for a CrossOver makeover.

We designed the new UI with two goals (twice as many as the leading competitor1): to make CrossOver more intuitive to use and offer a more modern look and feel. We wanted it to be easy for our users to find the things they need to do most often and to bring the CrossOver interface in line with our branding.

Here’s an overview of the three big changes new to CrossOver 22:

First, we made extensive changes to the installation process. Right away, you’ll notice that we updated the search functionality. Furthermore, CrossOver no longer uses a wizard format for installations. Instead, it uses defaults when possible and prompts you for the info you need to provide when necessary. Of course, you can override the defaults to customize your experience, such as choosing a different installer than the one CrossOver downloads automatically. All of this was designed to be easy for users who want to be guided through an install using default options and for users who like to tinker.
Second, we revamped the bottle view. While we made several tweaks here, the most prominent is the new right sidebar. The sidebar includes the most frequently used options accessible only via menus in CrossOver 21 and earlier. They’re all still available by menus, so let your muscle memory guide you if that's your thing. We also moved the Control Panels to the bottom of the right sidebar; they’re still accessible but don't dominate the bottle view like they used to.

And third, we have a brand new “Home” view in CrossOver. It is a mash-up of the old “All Bottles” view and the old “Favorites” functionality. All launchers display by default in Home. If you only have a few apps installed and you want to be able to launch them from one place - great, use this view without modifications! If you have a lot of applications, or if your applications have some launchers that you never use, this view is now customizable! Just right-click to hide from Home. Changed your mind and want to add it back? Go to the bottle view and right-click to add to Home.

We're very grateful to our BetterTesters for providing feedback via surveys and usability studies. Now that we’ve released this new CrossOver design into the wild, we will be asking for feedback again soon. We hope you enjoy CrossOver 22!

1 Recent marketplace surveys indicated a preponderance of corporate entities undertaking projects with one goal. Our quantitative team checked the math on this. It has been confirmed that our two goals are twice that of the average competitor in the same or similar market spaces operating within the same economic headwinds. 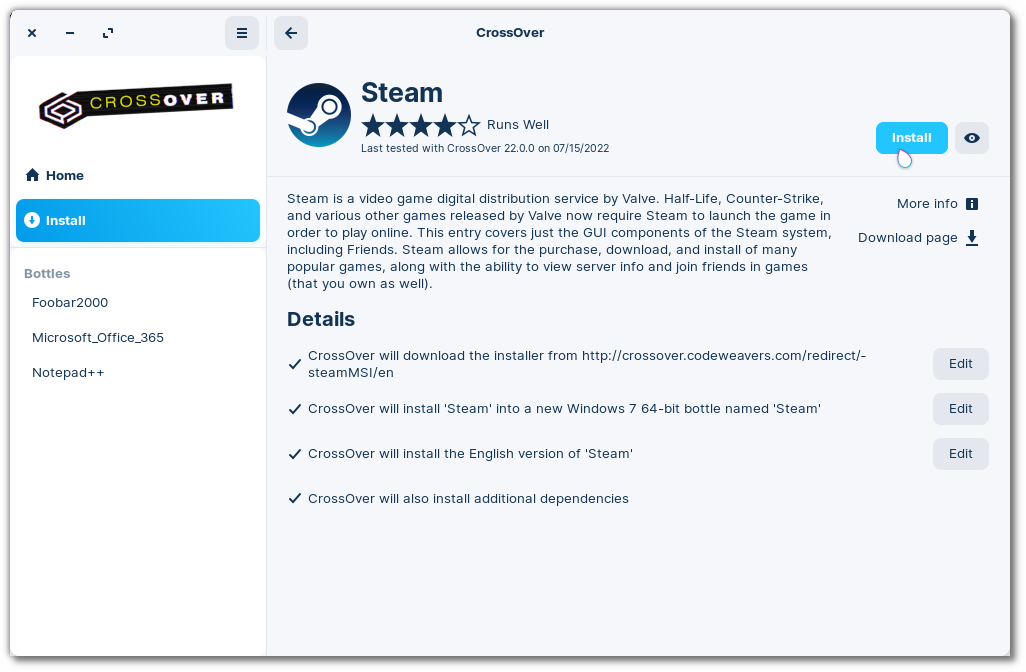 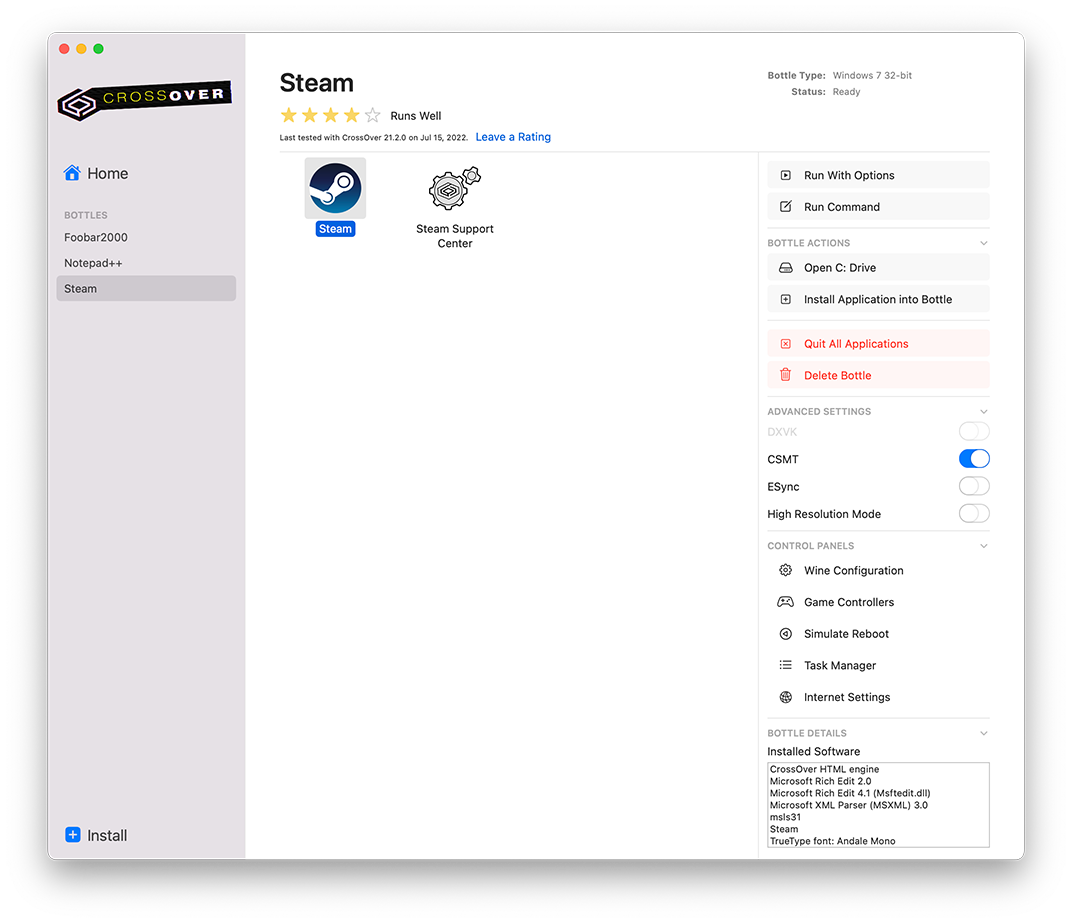 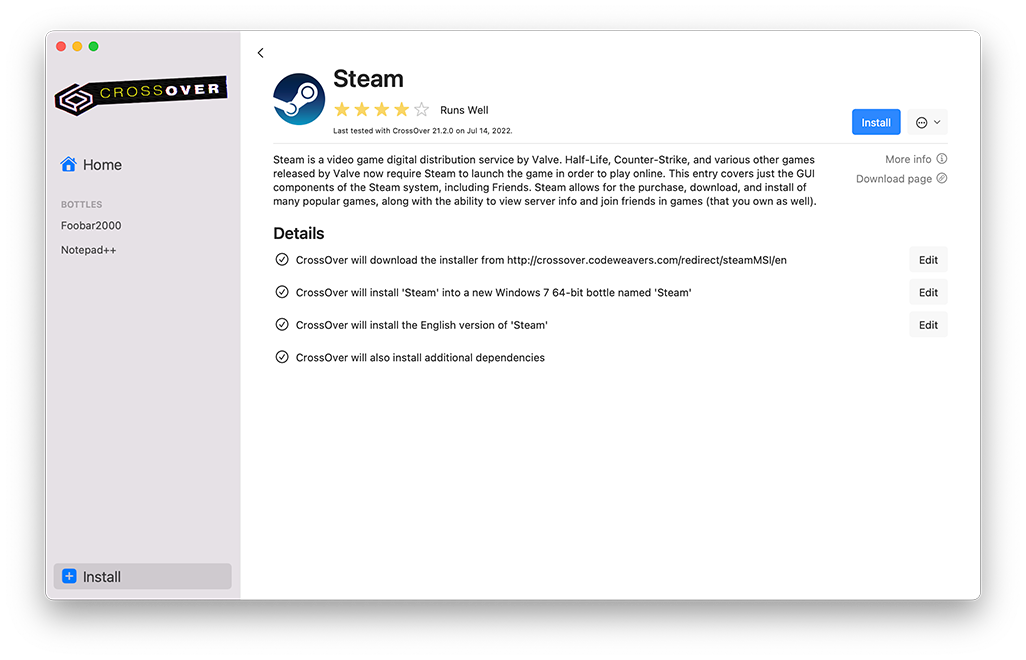 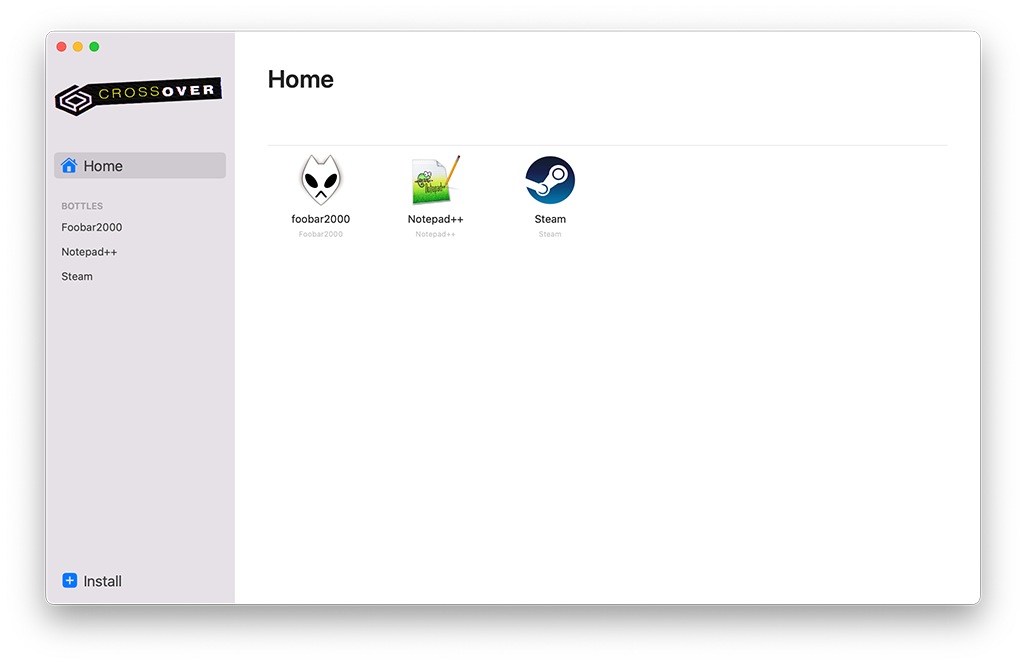 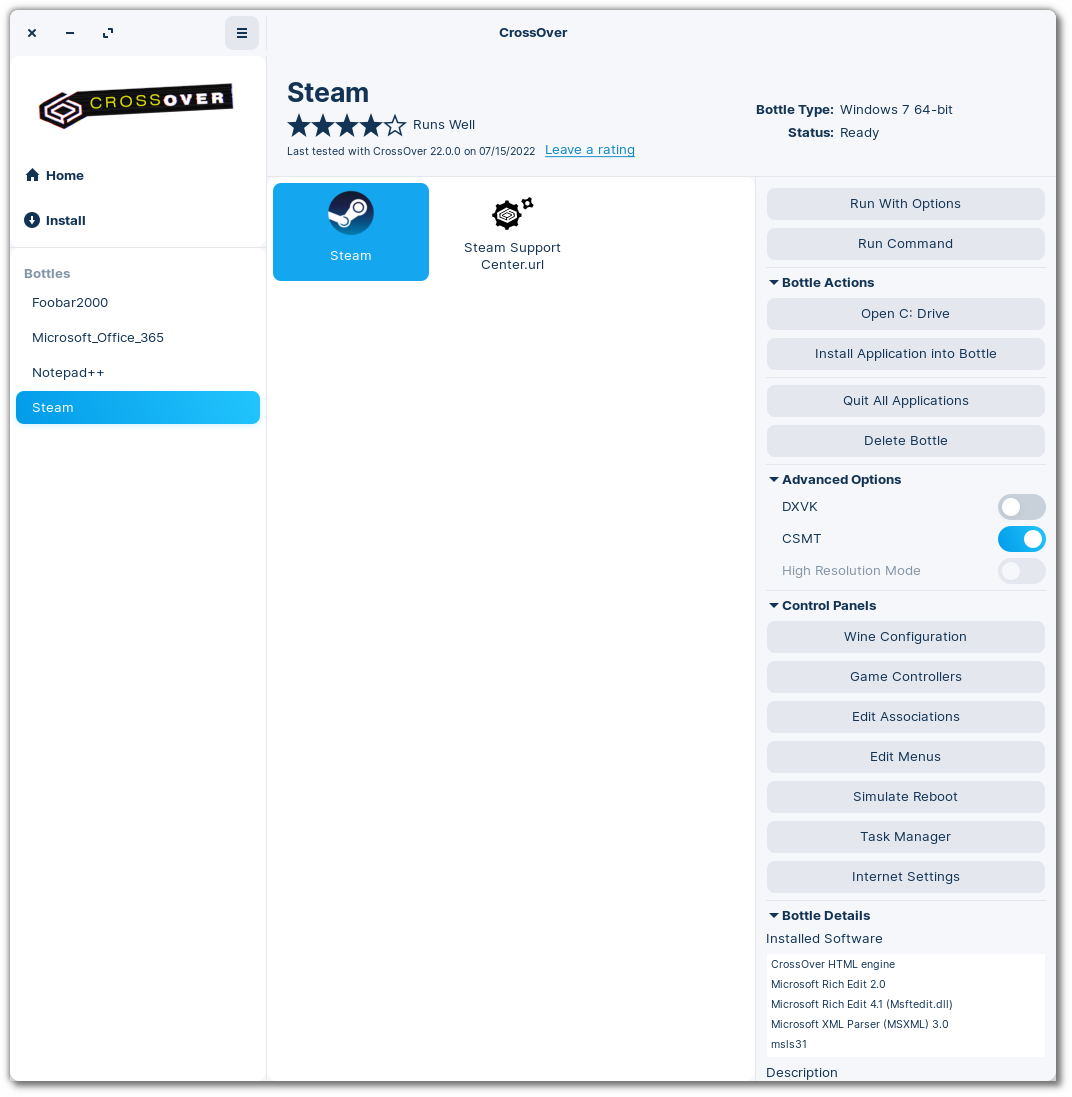 Good stuff; even easier to use! “Sorry for the convenience.” 😂

I find with the update that I can no longer identify what drives I have on my computer. Previously, I was able to see the names of my flash drives I use for backups. Now all I get is a listing of the drives ( D, E, F, etc) with no identifying names. I have to guess which drive I am saving to.
Can that be fixed?

When I started to read this I was instantly horrified. Why? Because most of the time, when companies say they had to do a re-design that was "overdue", it means everything changes and nothing for the better. At least in my experience. I like when good things stay as they are, which is also why I'm using the MATE Desktop on Linux. Arch Linux specifically, because I don't get major updates shoved down my throat and I can adapt slowly if some application introduces some bigger change.

However, you've done very well this time. I instantly liked the new GUI and no functions are missing. On MacOS there's one major problem though: The whole thing doesn't work anymore. The bottles don't stop "scanning", bottle settings are disabled and applications don't launch.

Edit: Fixed it. Seems like the updater didn't like my 0027 umask. Several symlinks inside the bundle couldn't be read by the user.

Great blog post. You do realise that you're all bonkers there ha ha ha - and I mean that in the best possible taste.

I'm going to throw my twopenneth in here before I trot off an update it so I can bask in all the glory of the new CX22 (all the while hoping that there is an Edit Menus icon in each bottle just like my good old Linux CX21 has and I missed dreadfully in the MacOS version). Don't tell me, let me find out for myself, then I can dance around the flat whooping with glee whilst my partner phones for the men in little white coats, either that or sulk and raid his stash of chocolate and vodka to console myself (I may do that regardless).

Great idea creating a mash-up of All Bottles and Favourites, but I'd have preferred to have called it Bottorites instead of Home, it makes for a far better mash-up name. Never mind, some Tippex and a marker pen on the screen should fix me up very nicely.

And so I go forth to upgrade.

Tally ho and all that.

(Poo, still no Edit Menu that I can find)

Congratulations on the release!

Congratulations on the release!

2
Posted 2022-08-24 04:48
#8
Copyright © 1999-2022 All Rights Reserved · Privacy Policy · Code of Conduct
CodeWeavers or its third-party tools process personal data (e.g. browsing data or IP addresses) and use cookies or other identifiers, which are necessary for its functioning and required to achieve the purposes illustrated in our Privacy Policy. You accept the use of cookies or other identifiers by clicking the Acknowledge button.
Acknowledge
Please Wait...
eyJjb3VudHJ5IjoiVVMiLCJsYW5nIjpudWxsLCJjYXJ0IjowLCJ0enMiOi02LCJjZG4iOiJodHRwczpcL1wvbWVkaWEuY29kZXdlYXZlcnMuY29tXC9wdWJcL2Nyb3Nzb3Zlclwvd2Vic2l0ZSIsImNkbnRzIjoxNjU2NDMwODcxLCJjc3JmX3Rva2VuIjoibmhzYmdKM21BV3h4OXAyYSIsImdkcHIiOjB9